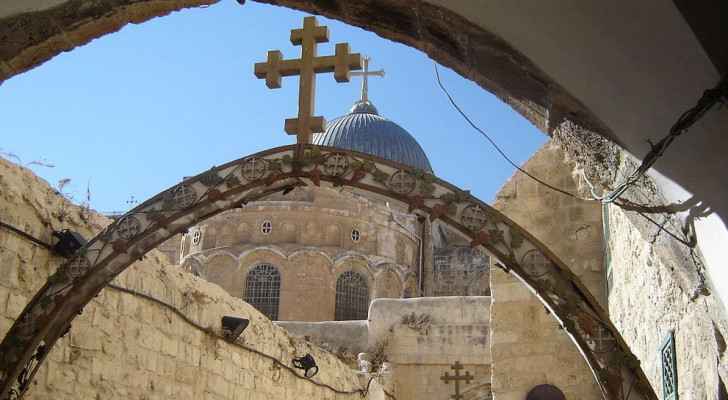 On the morning of Monday 6 June at around 10:30am local time, Israeli Occupation radicals “trespassed into the Greek Garden on Mt Zion in Jerusalem, property of the Greek Orthodox Patriarchate of Jerusalem,” the statement said.

According to reports, the trespassers tampered with the property, exhumed graves and threw rubbish in the courtyards, in an attack that is both provocative and systematic attack on churches.

The Patriarchate decided to lock the gates to their private property ahead of Jewish holiday Shavuot, in coordination with local police, as extremists have historically trespassed and trashed the site, the statement added.

“Inside the garden, radicals also broke through the fencing protecting the chapel on the site, which will be used this week to celebrate Pentecost. Men cut through the barriers and climbed into the chapel, a sanctified and holy space to Christians which is sadly regularly defiled by these groups.”

It added, “Immediately after the incidents, the Patriarchate’s personnel along with the groundskeeper filed a report with the police and a police report was issued, and we welcome a thorough investigation and extra security to protect this property and the life of the groundskeeper.”

“These measures are commonly provided to religious minorities under threat throughout western democracies, and Christians in Jerusalem should be no exception,” the statement stressed.

“The deadly threats to church staff and destruction of private property and holy sites is unacceptable. Moreso, the timing of this act is not lost on the churches - it is a provocation in the week leading to holy services taking place at the site as we remember the arrival of the Holy Spirit and growth of the church through Pentecost. We invite media outlets and diplomats to join the Patriarchate of Jerusalem for Pentecost service on Monday 13 June at 8am in an act of peaceful solidarity with the churches and its witness. The service will begin at Holy Trinity Church at the Patriarchate School on Mt Zion,” the statement said.

“About the Greek Garden: The Greek Orthodox Chapel on the site is used for Pentecost and is often vandalized. Israeli radicals frequently pour paint into the chapel, urinate into the catacombs, and destroy landscaping. Groups frequently litter and vandalize the basketball court branded with the Patriarchate logo - a physical and rhetorical act of intimidation against the churches. Because of this, the church has hired a private security guard who is regularly threatened. Liturgies are loudly and violently protested by religious radical Israeli groups every year. Police are required for the safety of priests and pilgrims. This animosity and confrontation is fuelled by radical claims to the property,” the statement ended.

Palestinian civilian dies due to injuries sustained in ....

Palestinian civilian dies due to ....