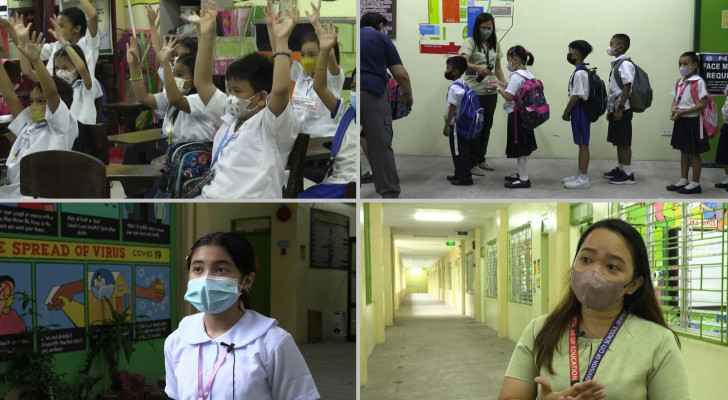 Millions of children in the Philippines returned to school as the academic year started on Monday, with many taking their seats in classrooms for the first time since the Covid-19 pandemic hit.

The Philippines is one of the last countries in the world to resume full-time, in-person lessons -- sparking warnings that the prolonged closure of classrooms had worsened an education crisis in the country.

Children in masks and uniforms lined up for a temperature check and a squirt of hand sanitizer at Pedro Guevara Elementary School in Manila, which had shut classrooms since March 2020.

The school has adopted a hybrid system of in-person and remote learning as it transitions its nearly 6,000 students back to face-to-face classes by November -- a deadline set by President Ferdinand Marcos Jr soon after he took office two months ago.

Grade six student Sophia Macahilig said she was "excited" to meet her classmates and teachers after two years of Zoom lessons.

"We used to have fun and now I can have fun again," 11-year-old Macahilig told AFP.

But many students have a lot of catching up to do.

Even before the pandemic, nine out of 10 Filipino children could "not read a simple text with comprehension" by age 10, the World Bank and other agencies said in a recent report.

Only 10 countries were worse off, including Afghanistan, Laos, Chad and Yemen.

As face-to-face classes resume, old problems persist: large class sizes, outdated teaching methods, poverty, and lack of basic infrastructure -- such as toilets -- have been blamed for contributing to the education crisis.

Pedro Guevara science teacher Ethel Tumanan, 32, said she was worried that students had missed out on valuable learning over the past two years.

"As a teacher, we really prefer face-to-face, at least we are the ones who can gauge and assess where our pupils are at."

In the lead-up to the reopening of classrooms, the government has been ramping up a vaccination drive and will provide students with free public transport until the end of the calendar year.

On Saturday, the government began handing out cash aid to students and parents struggling to cover expenses, leading to chaotic scenes outside distribution centers.

In the city of Zamboanga, 29 people were injured when several thousand tried to push through the gate of a high school.

Thousands stranded at Philippine airports due to power ....

Thousands stranded at Philippine airports due to ....

Thousands stranded at Philippine airports due ....